Distributed Denial of Service (DDoS) attacks continue to remain the top threat to IT security and have evolved in almost every way to do what they do best: shut down your vital online services.

Unlike intrusion and malware attacks, DDoS attackers have learned that they don't need to attack only end-point servers to shut you down. They attack any IP address that routes to your network: unused IPs, Inter-router-link public IPs or Firewall/Proxy/WiFi Gateway public IPs.

Cloud-based CDN and DNS-based cloud mitigation cannot protect you from these attacks. What is the impact to your business if your users cannot reach cloud services because your firewall or demarc router public IP is being DDoSed? Your CDN-based web servers may be up but your business is down!

Sophisticated multi-vector and multi-layer DDoS attacks use direct and reflected packets where the spoofed, randomized source IPs are impossible to ACL. These attacks are increasingly common as Mirai-style code has morphed into many variants and has been commercialized by providers of "stresser" sites. Anyone can call down large attacks for a few dollars.

To combat these attacks, you need a solution that dynamically protects a large attack surface.

Only Fortinet FortiDDoS appliances use Machine Learning detection methods in dedicated, custom-silicon Security Processing Units (SPUs) to deliver the most advanced and fastest DDoS attack mitigation on the market today, without the performance compromises of multi-CPU or CPU/ASIC hybrid systems. The TP2 and TP3 SPU Traffic Processors inspect 100% of both inbound and outbound Layer 3, 4 and 7 packets, resulting in the fastest and most accurate detection and mitigation, and the lowest latency in the industry.

FortiDDoS uses 100% machine learning, behavior-based methods to identify threats. Instead of requiring predefined signatures to identify attack patterns, FortiDDoS uses its massively-parallel computing architecture to build an adaptive baseline of normal activity from hundreds-of-thousands of parameters and then monitors traffic against that baseline. Should an attack begin, FortiDDoS sees this as abnormal and immediately takes action to mitigate it.

FortiDDoS protects you from known and "zero-day" attacks without creating local or downloading subscription signatures for mitigation. Other vendors try to conserve CPU real-time by inspecting a relatively small number of parameters at a low sample rate, unless and until an explicit signature is created. FortiDDoS' massively parallel SPU Traffic Processors sample 100% of even the smallest packets, for over 230,000 parameters for each Protection Profile. This allows FortiDDoS to operate completely autonomously, finding some attacks on the FIRST packet and all attacks within 2 seconds - broader and faster mitigation than any other vendor or method. There is no need to adjust settings, read pcaps or add regex-style manual signatures or ACLs in the middle of attacks. While attacks are being mitigated, FortiDDoS continues to monitor all other parameters to instantly react to added or changed vectors.

The Resurrection of Botnets

Botnet-driven DNS attacks are popular because they can target any type of infrastructure or they can co-opt your DNS servers to attack others with reflected DDoS attacks. FortiDDoS is the only DDoS mitigation platform that inspects 100% of all DNS traffic in both directions, to protect against all types of DDoS attacks directed at, or from DNS servers. It validates over 30 different parameters on every DNS packet at up to 12 M Queries/second. It's built-in cache can offload the local server during floods. FortiDDoS' innovative DQRM feature stops inbound Reflected DNS attacks from the very first packet. FortiDDoS also supports FortiGuard's Domain Reputation Service for ISPs to protect clients from known malicious domains.

Many hosting providers, MSSPs and ISPs are moving away from out-of-path detection, diversion and scrubbing as too limited and too slow for important infrastructure. Netflow-based detection and mitigation monitors a limited number of parameters for a few different attack types. FortiDDoS mitigates more than 150 attack events, many with "depth" (all 65,000 TCP and UDP ports are monitored and mitigated, for example). 100% packet inspection and leading packet performance ensures mitigation from singlepacket anomalies to link-filling small-packet, fragmented UDP floods.

Studies are showing that 75% of DDoS attacks last less than 15 minutes. Customers are also seeing multi-vector attacks, attacks that sequentially change vectors and pulsed attacks that start and stop frequently. FortiDDoS begins mitigating in less than 2 seconds and its massively-parallel detection and mitigation ensures multivector, sequential and pulsed attacks are seen and stopped.

FortiDDoS also offers a wide range of static and dynamic ACLs to offload other infrastructure. For example, FortiDDoS supports BCP-38 and FortiGuard Domain Reputation blocks IoT and end-user communications to botnet controllers and malicious domains. FortiDDoS ACLs operate at line-rate with no impact on performance even with millions of blacklisted IPs.

FortiDDoS is the ONLY product in the industry that supports large ACLs in hardware with no performance degradation. While most DDoS attacks use spoofed Source IPs, your existing Indicators of Compromise IP and Domain lists can be uploaded to FortiDDoS to offload other infrastructure 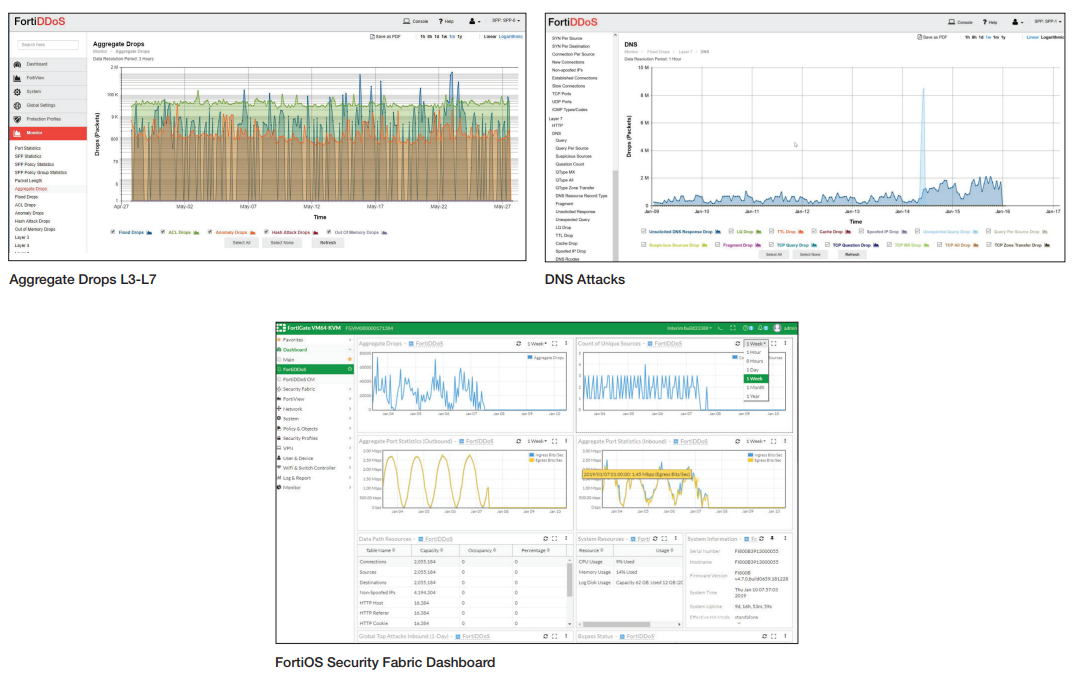